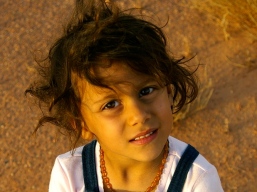 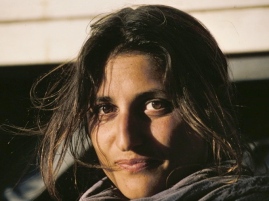 LucaVagniluca, 43 years old, anthropologist and documentarist. Since 1988 he has travelled extensively through Africa and Asia,  producing documentaries ,photographic and  travel articles . In 1996 he participated in a 9 month research project on Shamanism in the Himalayan area of Nepal. In 1998  together with his wife  he founded 91PARALLELO,  an association specialised in documentaries and research.  Sociable and determined, loves ,keeping moving, mountains and  the simple things in life. Hates ..not keeping moving the seaside and the complicated things in life.

Lusira, 4 years old ,started her life in Angola in the warmth of her  mothers womb . Experienced little traveller, participant  on 2 long trips in 2008 and 2009 through Tunisia, Algeria, and Libia. Sociable, sensitive  and curious , expert dune climber,loves more than anything her teddy, camels, drawing, picking flowers,  and her friend Carlo.

Sameena Hassan, 43 years old, archeologist and documentarist . Born in England from German mother and Pakistani father. After her studies at Manchester University, she moved to Italy in 1992  where she met her husband Luca.  A founding member of 91 PARALLELO, she has been occupied mostly with the filming and editing of the documentaries produced.  Loves, open fires,coffee in bed and (repetitive, but true) the simple life …Hates telephones, beurocracy and dealing with money.

Giulio, 2 years old, still fresh in this world, big hands and promising smile. Had his first birthday in a sandstorm in the Libyan desert. Loves more than anything the  brumm-brumm of the truck, his wooden bicycle, eating anything  and doing  ‘things he shouldn’t do’